Some years ago, I was studying at Jesus and Mary College in Delhi and had just gotten done with the first year there. Ahead of me were two more years of college (a bachelor’s course in India used to be three years long) and it didn’t make me happy to think about it. I was experiencing intense reluctance. In short, my experience at the college was not at all inspiring. I wrote to Swamiji, explaining to him what I was going through. I had lived at Ananda Village some years back and that was heaven. But now I was meeting people from out in the world every day at the college campus – students, who unlike me, had worldly goals to pursue and teachers who were not so concerned about being kind to us students. I still found ways to relate to them. But what was being taught was many a times very hard to take in. Some of it was fun because certain teachers were light hearted and had a knack for making it fun. But some subjects I’m afraid were too heavy for me and had no meaning at all. I was suffering in my heart especially because of the content, the competition, the grading system and the books or movies we got exposed to as part of the curriculum there. I was feeling very lost.
Swamiji understood me well. He knew that I was not wanting to go through college. But early on, right after I had finished high school at Ananda Village, Swamiji had asked me to get trained as an Education for Life teacher. And so, like Master (Paramhansa Yogananda), I first had to earn a Bachelor’s Degree before I could get my teacher training at Ananda. College was just going to have to be a part of the picture. Swamiji’s words to me, when I wrote to him, were full of consolation and gave me strength. He gave an example from his own life which was very helpful. This was his letter to me –

Some things we just have to put up with, as necessary bridges to where we want to go. At the age of twenty, the road just ahead of us looks very long, but in retrospect it is so short! I urge you, since it will help you very much to have this teaching certification, to go ahead and finish the project. It will make you stronger in the long run.

When I was building Ananda, I had to earn an incredible amount of money. I did it through teaching yoga classes in cities around San Francisco. But I’m afraid there were times when I complained to Divine Mother, “You know I’ve never wanted money. Why do you make me have to earn so very much!?”

I found, however, that my real gain at the end was not the money, which I did earn and paid off all my debts, but the spiritual strength I gained from doing what needed to be done.

My prayers are with you, and my love,

And so I learnt that completing college, despite how hard it was, was going to make me strong for challenges that might come in the future. I had Swamiji’s love and his example, so what was there to be afraid of? I couldn’t fail – I knew that, because I used to study to the best of my ability and pray to the Masters too. What I needed to learn from that experience was exactly what Swamiji said – doing what needed to be done. Swamiji had built Ananda on that principle. He had committed himself to establishing a place where people could live in harmony and serve God. And today when I walk through the fields at Ananda Village, I marvel at the courage and the expansive spirit of Swamiji that brought into existence such a beautiful place like Ananda. The people who joined Swamiji have also been through tests like the fire that burned down the community. But seeing Swamiji’s amazing example, many searched for that strength and perseverance inside themselves and did what needed to be done to bring back the community, no matter how hard that was.
I did finish college ultimately, with Swamiji’s blessings, and went on to get trained as an Education for Life teacher at the Ananda College of Living Wisdom. After that I became a teacher of young children. The journey was full of challenges, to say the least, but I’ve kept Swamiji’s guidance in my heart and mind. It has been a rewarding experience and like Swamiji promised, it has made me strong. 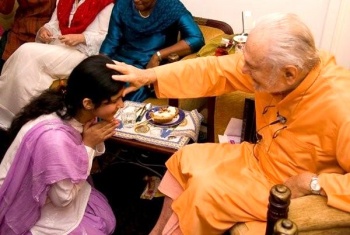