Everyone is an artist. It’s just that the way we express ourselves are different. That’ i the thought that I have always had, and still do. I love the arts: the colours, the written and the spoken words, music, and the graceful movements of the body in the form of dance – all of these communicating and touching us deep within, moving us beyond words. I cannot philosophize the deeper meaning of Art or how it is to be viewed or interpreted, but I can only share my journey and what I have picked up and learnt along the way. This is what I have endeavored to do here…

My Journey with Art

I have always been in love with colours. Painting came naturally, especially since I came from an artistic family. I have always loved dynamic images, images that says something. My first ‘meaningful’ drawing as a two-year old was a fish – drinking water! I can see many asking how that is even possible. And I say, “by putting lots of bubbles in front of the fish’s mouth!” Hahaha… And during the time I was in kindergarten, I was known among my friends for drawing “flying goddesses”. Now many would identify them as angels or fairies. I became fixated on Krishna, Durga and Saraswati. I drew Krishna for a long, long time. Anyone looking at my artworks would notice certain things – the feminine form predominant wherever figures are involved, the play of light against dark, and a general love of the expanse of the sky, the depth of the woods, or the endlessness of the cosmos….

I was drawn to the painting styles of the great masters, especially those with a realistic touch. To me, art was not only something expressing what’s on the inside, it was also an expression of my connection with this world. It was an interpretation of what I see and feel all around me – good, bad, ugly. This world has so much to offer! Through this understanding of my connectiveness with this world, my inner expression too would find meaning; it was this that I wanted to capture in colours. And thus, I continued painting whatever I saw and felt drawn to: old, bent gnarly trees (which I called “trees with personality”), old, broken huts and cottages (which I felt has “stories to tell”), the last rays of the sun saying goodnight as night replaces the day, the glow of the burning embers of a bonfire as gypsies stopped to rest in the desert, the deep lines of wrinkles on the face of an elder (which to me means the richness of having seen the joy and overcoming the sorrows of life), the glow of a lamp falling on a monk’s rosary as he meditates… the list continues. Things touch me deeply and easily. Interpreting them into canvas is what becomes difficult sometimes. There’s so much to put into it… And what I cannot express with the paints, I do so in words. With poetry… 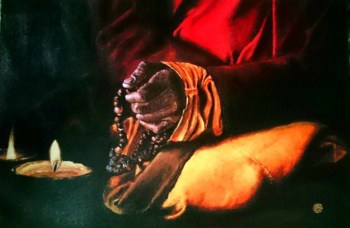 I painted off and on. I got burst of inspirations; too many to catch them all at the same time. My head has always been buzzing with ideas and inspirations. But what I had begun to do was to start something with full excitement, and when I was not able to catch these ideas exactly as I had envisioned them, I would promptly give up and jump to the next. My one challenge has always been the thought that it should be perfect, that what I see in my mind, and the feeling associated with that, needed to be transferred exactly on the canvas. That has put so many of my artworks in the backburner because it is not humanly possible, I realize that now. ‘

I was reading Swami ji’s book “Art as a hidden message” and when he was talking about intuition and inspiration, he said, “Artistic expression is filtered inspiration”. One simple sentence that explained everything for me. Meaning that whatever ideas and inspiration we receive gets coloured with the ego when we try to express it in our human level. “Perfection, at this stage of expression, is impossible. No one can commit exactly to mere canvas or paper anything so insubstantial as an intuition”. There! I found my answer. In one single paragraph.

The Need for Inspiration

This September, when I met Jyotish ji and Devi ji again, the first thing Devi did was to hug me and ask, “Are you still painting?” And my answer was a slow ‘yes’. Slow because, honestly, I had not been painting as much as I would like to. And saying ‘yes’ at that moment felt like a kind of a lie. It was a moment of mixed feelings, my mind going in all directions while trying to stay in the present moment. How is it possible that multiple revelations could take place in one single moment? But it did for me. I realized in that nano-second when I answered ‘yes’ the walls I have been building within myself, the procrastinations, the “I-am-not-good-enough-yet” trap that I was putting myself through over and over again.

One might be blessed with a wonderful gift but, sometimes, that by itself is not enough. You need inspiration. Self-motivation is not always possible. It helps when someone believes in you, especially when you are finding it difficult to believe in yourself. For me, that moment came some years back when someone high up in the hierarchy of an organization called me up wanting me to paint a mural in a school, and she refused to take no for an answer. So there I was, fighting my own inadequacies and telling myself, “I can do this!” It took me 3 months to complete, but it was a piece of work that I was honoured to have been given an opportunity to do. I was not only painting, but painting themes which I thought were impossible just a month ago. It marked one of my most satisfying art-projects ever! 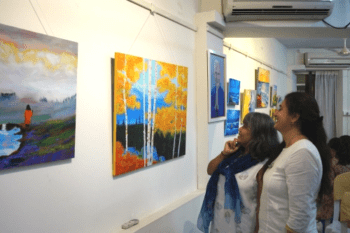 This inspiration and motivation came again when I needed it most, this time in the form of Jyotish ji and Devi ji. As I stood there, simply soaking in the colours of Jyotish ji’s uplifting paintings, I felt myself transported to a different world where everything is beautiful. Divinely so. Which is how our souls yearn to be. And listening to his deep, inspiring talks about his works answered a lot of questions I had about myself and my approach to work, and to life itself. I can also never forget that moment of Devi ji’s loving question, or how I felt when I answered. There can never be a right time for anything unless we jump in and make it right. There is no such thing as a perfect moment that will come for us. Every moment is perfect by itself. We need to walk up to it and claim it for our own. I realized that I was so tied up to the outcome of my work that I was not able to create at all… not for lack of ideas, but the lack of belief in myself, forgetting that I am a work in progress and, as such, perfect as anyone could be in this moment in time. My ego, as usual, came in my way. And like Jyotish ji said, (paraphrasing) “I was never bothered whether people will like my artwork or not. I paint because I feel inspired to.” And that is exactly how we are supposed to approach our works. No attachment. Just be.

Insights from this Journey Taken So Far

Like I said, everyone is an artist. Our expression of life is unique, just as our expression of ourselves is unique. Why then, should art be any different? One reason why there is richness in life is because each one of us is different. Our views, our thoughts, our experiences. This same difference can enrich and empower each one of us, if we allow it to. If we allow for our own unique signature to surface and not be afraid to own it, to flow with it. Art can indeed open the door to a deeper understanding of our own selves, and of humanity as one whole entity.

Related: Nayaswamis Jyotish and Devi’s Talk on “Everyone is an Artist”