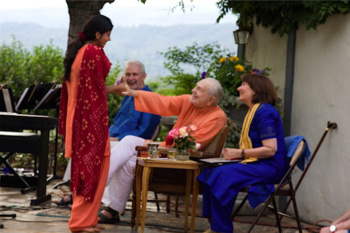 I first met Swamiji when I was 14. It was the day of his birthday in 2004 and I went with my family to meet him at his satsang at B-10/8 (the ashram in Gurgaon). As I sat there on the floor close to his feet, my eyes started to tear up. Deep inside I knew that this was a life changing day for me. I had seen Swamiji on Sadhana T.V. channel for few months now, but this day was the start of my journey having Swamiji and others in Ananda, in my life in a more real way.

Everyone started going and meeting him one by one to take a blessing. Soon it was my turn. I bowed to him and Swamiji blissfully smiled and asked me my name and my age. What other things were said, my mind does not remember now. But what I do remember clearly are the moments when he was about to leave us all at the end and head back to his house couple of blocks away. Everyone got up and people lined the hallway so that they could see him while he walked out. I was standing next to the wall opposite the door from where Swamiji was about to leave, somewhat hidden. Swamiji had almost reached the door and then just as he was about to walk out the door, he changed course and came towards me. He took my hands in his and smiling blissfully he said, “It’s nice to have you here.”

This was such a special moment for me. A very sweet friendship developed between me and Swamiji since then. Our Guru-disciple relationship, and our bond lasted till the end when he left his body in 2013. However it wasn’t just ten years of knowing Swamiji. Our divine friendship has continued as he often comes in dreams and I make it a point to tune into him the best I can. He is my spiritual father, as he himself once said, and he always treated me just like a daughter. I am fortunate and blessed that I had his love in this way. To follow Swamiji’s will and be a part of Ananda, I took the step of leaving ‘home’ in 2006. When we come onto the spiritual path, many are the tests we face. One of them can be leaving one’s family if needed, as was the case with me. Then I travelled to Ananda Village to study at the Living Wisdom School.  My mother and brother were also joining Ananda at that time, and clearly, our time living together at our family home had come to an end.

I was involved in a project with some fellow devotees at Ananda one time. I was 20 years old. The people heading the project had a lifetime of experience in the field and besides that, they were devotees who had made many noble sacrifices in order to serve others. One day, it so happened that I was outraged by someone in the group and was very frustrated about it. One thing led to another and I ended up speaking disrespectfully (showing defiance) to the project heads as they didn’t think it was right of me to be expressing outrage. I continued to defend myself. Swamiji heard about it and he wrote me this letter:

Master used to say that when people are angry, the mouth becomes a canon and one’s words become canon balls, which destroy friendships and do harm to others….So the first thing you must learn is to be polite. And, as young as you are, you should show respect for others….There is a time for seeing all people as equals, but there is also a time for showing proper respect for one’s elders, and for the experience they’ve gained in life. In fact, there is never a time for being disrespectful toward anyone….I am not going to advise you now, for it is you yourself who must see things in proper proportion….You must develop the dignity of a mature person, and let your own innate nobility shine before others.

My love, blessings, and prayers are with you,

I have quoted him exactly as he said it and haven’t included a few lines in between as they went into the details of the matter.

Through these words of his, Swamiji taught me that I must always be respectful towards my elders. He was also saying that when someone becomes angry or lets his mind become angry, most often people express that anger verbally and talk disrespectfully or egotistically. Good friendships become bitter and break. So I learnt that my fight is against the emotion of anger primarily. And if anger has already entered my mind, I should have some sort of technique to calm myself down and not express that harmful emotion.

I also realized that I often used to treat everyone as my equal. After this incident I really made efforts to be humble and give respect to my elders no matter what. It takes time but it is worth the effort because winning back a friendship through sincere effort is spiritual victory. We are blessed if we are able to do this. Interestingly, soon one of the project heads took the opportunity to sit with me at Swamiji’s house and guide me in a journaling session where we brain stormed all the things I was grateful for. She helped me to change my perspective on things and see the world differently. This also helped me very much because now I was beginning to focus on what’s right, rather than what’s wrong.

Going back to the letter Swamiji wrote, in response to it I promised him that I would try to be respectful towards everyone in future and thanked him for inspiring me to change myself. It has truly been a very useful and important lesson. I have been tried and tested at other times since then, but despite the challenges I have tried hard to remember and practice what Swamiji and my project head taught me. My heartfelt gratitude to Swamiji and my project head for guiding me.