*In this blog, Master refers to Paramhansa Yogananda and Swami to Swami Kriyananda 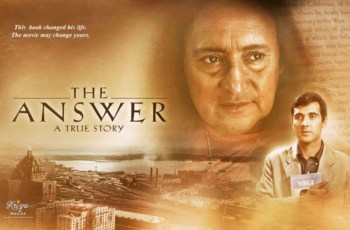 As rightly said by someone, “Learning is a lifelong process;” I experienced this when I took up the promotion of the film The Answer. Truly speaking, I instantly jumped at the opportunity when it was suggested to take up the movie promotion work for Ananda Pune. Being a novice in the field, I thought that movies are fun and that it would just be a piece of cake.

However, during the very first meeting about the promotion strategy with Aditya ji , Blezy and team, when ideas started pouring in, I became totally blank. I then realised that my imagined piece of cake needs to be mixed and baked too, and that without knowing the recipe for it. But then with an able mentor like Aditya ji to guide and support, I was still at peace as I knew though I had jumped into unknown waters, I had a lifeguard around.

From the very initial stage, I learned that promoting a film is not only posting fliers and sharing posts on the social media but much more than this. The first stepping stone in my promotion effort was printing the car stickers… which was a complete fiasco. The stickers turned out to be so tiny that they looked more like tattoos than car stickers. Someone even suggested I stick them over my forehead & move around as only then would they be recognized by people… Ha ha! Om Om! Learning is always fun provided you have a forgiving boss.

From the 31st of August – i.e. the movie release day – Book My Show became my most visited website, and my mobile became the busiest device ever. I was more often seen at PVR Icon at Pavilion Mall than any other place on the earth. 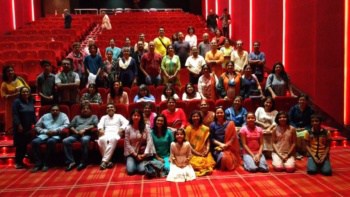 It would not be an exaggeration to say that with the release of The Answer the PVR Pavilion truly became a sacred place, where people flocked in to gain wisdom and positivity. The satisfied smiles of the people as they exited the movie hall proved that they had got their “Answers”. Being very much present for the movie almost every day, I could witness this miracle happen: with each show that passed, I saw people being touched by the movie in so many different ways… Some crying, some seated on the edge of their chairs, some serenely smiling, some laughing out aloud as if that very dialogue was a personal conversation between Master, Swamiji and them.

“I love you Master. Thank you for making me a part of this project,” were the only words I could say. I myself was surprised about how the film seemed so very new each day I watched it. I would like to add that I was not the only one who watched the movie several times; there were many more of Master’s children who very promptly and joyously joined me every single time I called them. They came with the same enthusiasm and happiness… I must have had the most relished popcorns and coffees of my life during these screenings .

Once more I was experiencing the blessing of being a part of a Spiritual family. Enthusiasm was flowing not only in Pune but all-around India, there were pictures, messages, happy faces, innovative promotion tactics posted on the Answer movie promotion group. People were so so very excited and happy… Oh, this positive spirit of Ananda…it has always amazed me!

It is a movie that enlightened the adults but I saw even children engrossed in it. Also, when we announced a movie evening after our Thursday satsang , it was the children who dragged their parents for the movie even for the second time to watch. Such fun it was to watch a movie with 50 family members big and small, all of them together!

I cannot forget the day when Nayaswami Jaya ji had just returned from the U.S.A. Very happily & readily he joined in for the movie and, after the show ended, people flocked around him to ask questions and click pictures. Jaya ji, as always, attended each of them joyfully and peacefully. These people were not only from Ananda, but many, many others… No wonder they were attracted to him, as he is a live reflection of what they had just witnessed on the screen: A Beautiful and Selfless Guru-Disciple Relationship.

An Outer and an Inner Message

If I reflect on the experience, so many beautiful memories start popping up that writing them all would never make me reach the end of this blog. Many calls were made to invite people, and many calls and messages were also received from people after they watched the movie. There is one of such touching messages, by a friend of an Ananda Devotee, which I would like to share here:

Good morning!!!! Yesterday I saw “The Answer” I must confess it is the purest movie I have ever seen. The songs, the dialogues, everything! When I was watching, I really wanted to meet Swami Paramhansa Yogananda. Though I have the book at my home, I never read it; this movie has inspired me to read it now. I am so grateful to you! Thank you so much….

I am very grateful and shall always remain so to all the people who have a lion’s share in the making of this film screening and promotion a great success. A big thank you to all my Ananda friends and al the viewers: this would never have been possible without the cooperation of each and every person who said ‘YES’ and stepped forward for Master and Swamiji.

I finally learned the true meaning behind this quotation of Master:

Thank you Master & Swamiji. We love you for all the Happiness that you have brought to us through your love and compassion, to help each and everyone of us to grow and find our own “Answers.”